An marvelous afternoon at the Placerville Pines

A marvelous afternoon at the Pines in Placerville

What an afternoon , The Folsom Lake Community Concert Association Outreach working with the Pines activity director Jon Young , the El Dorado County Ombudsman Program , the Four Seasons Quilters and the River Bend Folk Band wowed the residents of the Pines at Placerville.

The Pines meeting room was filled when the River Bend Folk Band arrived about 1 hour early to set up and they decided why wait, let’s play now. The band had played at the Pines before and the residents immediately responded with smiles and looks of enjoyment. 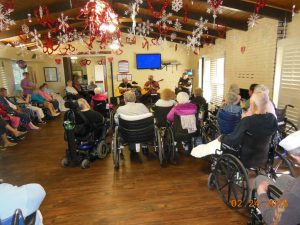 Soon to arrive were the other members of the Outreach Program:

John Raslear, El Dorado County Ombudsman and member of the FLCCA Board presented the residents with a combined collection of 20 beautiful quilts and 20 clothing protectors that were made by the Four Seasons Quilters. This was not the first time their beautiful works came to the Pines. The Quilters have made over 200 quilts and 200 clothing protectors for seniors in assisted living facilities.

In recognition of their work, Debbie Johnston the program supervisor of the El Dorado Ombudsman Program presented the Quilters with a beautiful certificate of appreciation. This was the first time that the Quilters visited residents that receive their handwork. The Quilters were inspired and returned home planning to make other items for seniors. 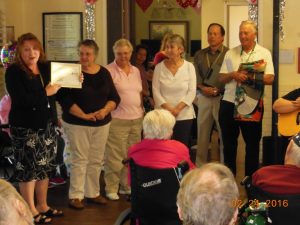 Accepting the award for the Quilters( left to right)  are Anita Quick , Barbara Erpenbeck & Zoe Meegan

Introduced next were the members of the FLCCA Board who wanted to visit the residents and to enjoy the music with them.

Members of the El Dorado Foundation were in the audience and were impressed by the powerful enjoyment that music has on the residents.

The River Bend Band played for over two hours and they formed a special bond with their audience. At the end of their program, residents pressed close to them to thank them and tell them how much they enjoyed the music. Residents left the performance with smiles on their faces and some acknowledged that the music reminded them of their past. 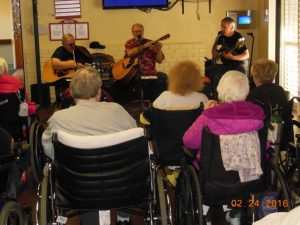