The Capitolaires at The Eskaton Lodge Cameron Park

The Capitolaires on Super Tuesday sang for seniors at four assisted living facilities. 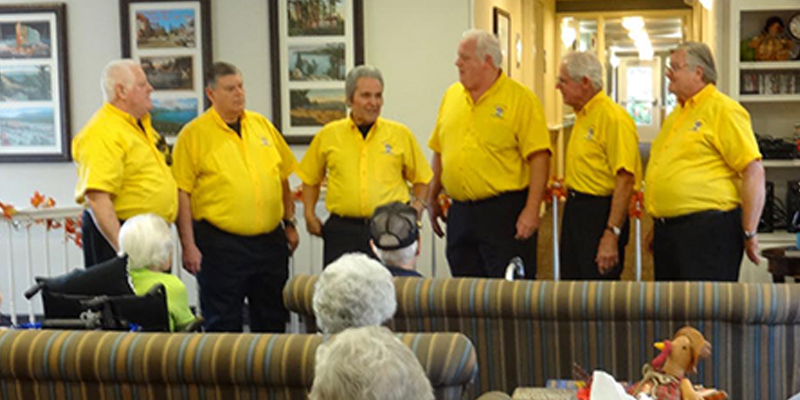 It all started with a casual conversation during a singing practice for the Four Seasons Christmas celebrations. Robert Duplantier remarked that he belonged to a group of singers called the CAPS. They are an offshoot of the Sacramento Capitolaires. John Raslear, an Ombudsman for assisted living centers in El Dorado County, asked: “Can your group sing for seniors in El Dorado County?” Without hesitation, Robert said, “YES.”

Robert and the CAPS have performed for seniors in the past and they realized how important music is to residents in assisted living facilities. The CAPS agreed and an ambitious plan was set in motion to travel up highway 50 and sing at three assisted living centers: New West Haven, Eskaton – Cameron Park and the Lighthouse at Ponte Palmero.The Folsom Lake Community  Concert Associtaiton helped to sponser this  outreach.

The beautiful harmony and warm personalities of these singers reached out to about 150 residents that watched and sang along to songs that opened their hearts and minds.